Members of the tit family found in the UK

In the UK, there are six species of tits in the family Paridae, part of a large family of small passerine birds. The two most colourful, the great and blue tits are common and among the most persistent and successful visitors to garden feeders. Three others are more similar in appearance and harder to distinguish from a fleeting sighting. The sixth species is the crested tit, which is now recognised as being from a distinct genus.

The tits are generalist insectivores that consume a wide range of small insects and other invertebrates, particularly small defoliating caterpillars. They also consume seeds and nuts, particularly in the winter.

In addition we have two unrelated species to which we have also called tits. 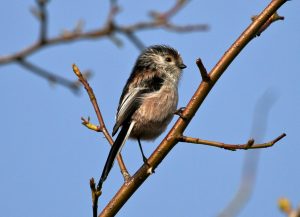 The long-tailed tit (Aegethalos caudatus) Photo: D. Farrar
This is not a true tit, but rather belongs to a closely-related small family Aegithalidae, characterised by their long tails and intricate nests woven from moss, lichen and cobwebs. 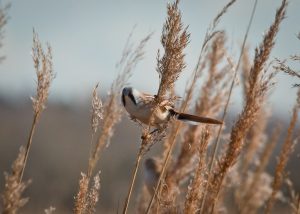 The bearded tit (Panurus biarmicus) Photo: K. Hinchcliffe
Also known as the bearded reedling is a small, sexually dimorphic reed-bed passerine and not actually a tit. New research has shown that this species is a sister group to the larks and is better placed in its own family, Panuridae It is usually found only in reedbeds but away from breeding areas in winter.