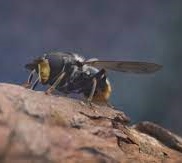 Critically Endangered Pine Hoverflies have been shown to be breeding successfully in new populations around the Cairngorms National Park thanks to conservation efforts by the Rare Invertebrates in the Cairngorms (RIC) partnership.

Surveys led by RIC found larvae in previously unoccupied tree stumps, meaning at least some of the Pine Hoverflies released by RIC partner the Royal Zoological Society of Scotland (RZSS) across three sites in October 2021 and March 2022 have completed a full breeding cycle, signalling a significant step forward for the species in Britain.

“We were delighted when RIC found adult Pine Hoverflies in the wild during the summer, but finding these larvae means we can now be certain that some of those adults found each other and found enough food to allow them to mate, lay eggs and produce a new generation at sites where this species has been missing for decades.

“These larvae mean we are seeing new populations emerge as a direct result of our wildlife conservation charity’s Pine Hoverfly breeding programme and the amazing habitat creation work that our partners at RIC and Forestry and Land Scotland (FLS) have been engaged in.”

Genevieve Tompkins, Project Officer at RIC said, “As one of Britain’s most endangered native species, Pine Hoverflies are vital to forest ecosystems, acting as both pollinators and waste recyclers. One of our aims to get more Pine Hoverflies in more places – restoring the species and returning the important functions they provide to native pine forests. Seeing these new populations starting to establish and breed represents very exciting progress towards that goal.”

Matthew Hawkins, Conservation Manager at Cairngorms National Park Authority said, “It’s great to see a key part of the Cairngorms Nature Action Plan having such success – the RIC project is an exemplar of how a scientific approach and partnership working can change the fate of an important species such as the Pine Hoverfly. With a quarter of the UK’s rare and endangered species being found in the Cairngorms National Park, projects like this are critical to ensure that the future of our unique wildlife is secure.”

Dr Taylor continued, “While this is an exciting step forward, our work and the work of the RIC partnership does not end here. We will continue the RZSS breeding programme for the flies at Highland Wildlife Park, learning from all the interesting observations we have been able to make during these surveys.

“In the coming months, we will also carry out additional staggered releases in partnership with RIC and FLS, as we attempt to ensure these new wild Pine Hoverfly populations are stable beyond this season’s success and thrive in the long-term.” 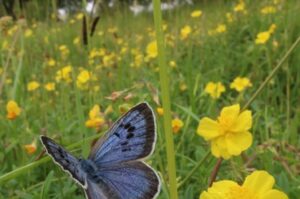 The once-extinct Large Blue butterfly, reintroduced to the UK in 1983, flew in its greatest numbers since records began on the largest number of sites in 2022. With a major grant from PWCF and thanks to meticulous conservation management by a partnership of scientists and conservation bodies, south-west England now supports the greatest concentration of Large blues known in the world.

Twelve new sites are being restored to flower-rich meadows suitable for Large Blue breeding, either ‘starting from scratch’ on arable land, failed conifer plantations and railway constructions, or by restoring bespoke grazing to degraded downland. Already, these support up to a third of the UK population of Large Blues, up from just 7% in 2019.

These restorations represent the largest and most innovative next phase of the re-establishment of the Large blue in Britain. Aside from the gains of other rare species, they are important internationally because the Large blue is listed as one of Europe’s most ‘Endangered Species’ of insect, and similarly worldwide. The twelve sites link or extend more-established populations spanning two landscapes in mid Somerset and, more recently, in the Cotswold Hills of Gloucestershire where a most promising toehold is now established.

The new restoration sites are managed, owned or administered by six partner organisations – National Trust, Somerset and Gloucestershire Wildlife Trusts, J & F Clark Trust, Natural England, and Oxford University. The restorations are led, supervised and monitored by the Royal Entomological Society’s David Simcox and Sarah Meredith, who also designed the bespoke management plan needed for each site.  Generous funding by the Prince of Wales’s Charitable Fund made this possible in 2019-22, including the successful physical re-introduction of Large blues to two sites in the Cotswolds (after 150 years’ absence) and of the Duke of Burgundy to Somerset. Other colonisations occurred by natural spread, as the new restorations link up with previous ones to form interconnected populations across two landscapes.

After this promising start, the next phase of restoration – research and development to extend the Large blue and associated wildlife across three landscapes in its former stronghold of the Cotswold Hills and gain a greater understanding of the threats posed by climate change – will again be led by the Royal Entomological Society and funded by Natural England’s Species Recovery Programme.

Nikki Jeffery, Executive Director of the Prince of Wales’s Charitable Fund: “This project has been a great example of what sensitive habitat restoration can achieve, resulting in record new populations of the Large blue butterfly as well as the re-emergence of other rare insect and plant species. PWCF is delighted that our funding, in collaboration with the Royal Entomological Society and other partners, has had such a significant impact.”

Prof Jeremy Thomas, Emeritus Professor of Ecology, University of Oxford; Chair of the Joint Committee for the Re-establishment of the Large Blue Butterfly: “The unprecedented success of this project is testimony to what large scale collaboration between conservationists, scientists and volunteers can achieve. Its greatest legacy is that it demonstrates that we can reverse the decline of globally-threatened species once we understand the driving factors.”

Simon Ward, CEO, Royal Entomological Society: “This project shows how innovative habitat restoration and evidence-based management can benefit several important and rare species in a single landscape. We recognise that there is still much work to be done to understand the complex relationships between plants and insects to maximise their conservation success for future generations, and we have a great team of partners and experts to take the next steps.”

David Simcox, Project Officer, Royal Entomological Society and the Joint Committee for the Re-establishment of the Large Blue Butterfly: “We have welcomed the opportunity to continue working on this iconic and difficult butterfly and to lead this diverse and energetic partnership. We are extremely proud that the partnership’s efforts have enabled hundreds of people to see this stunning and enigmatic butterfly flying on some of the most beautiful grassland sites in the country.

The greatest challenge ahead is to secure this expansion in a warming climate and to develop strategies to mitigate the impacts of extreme weather events.”

Paul Hackman Natural England Senior Adviser West Midlands, and Natural England representative on the Joint Committee for the Re-establishment of the Large Blue Butterfly: “Natural England is really excited to be supporting the next phase of restoring the Large blue butterfly into the Cotswolds landscape. The evidence gathered will not only help safeguard the Large blue but will also inform nature recovery initiatives in other landscapes and involving different species. All this is made possible by a strong landowner partnership supported by scientific evidence and high-quality practical management advice. Undoubtedly a blueprint for the future!”