ID Guide to members of the British crow family [Corvids]

The genus Corvus (crow family), eight species in total breed in the UK, but three of these are only found in very specific locations. They are the largest passerines (perching birds) and include rooks, crows, ravens and jackdaws.  In addition we have one species of chough, which probably belongs to a single clade, or monophyletic group and one each of the jay and magpie families, which do not constitute monophyletic lineages and are not closely related among each other. Northern populations of some species are migratory or nomadic.

All corvids, show intelligent behaviour. Given the difference in brain architecture in crows compared to primates, these abilities suggest that their intelligence is a product of convergent evolution.

The common raven (Corvus corax)
Possibly the heaviest passerine bird; at maturity.. There are at least eight subspecies with little variation in appearance, although with significant genetic differences. In the British Isles, they are more common in Scotland, Wales, northern England and the west of Ireland

The rook (Corvus frugilegus)
It is a large, gregarious, black bird, distinguished from similar species by the whitish featherless area on the face. Rooks nest collectively in tall trees (rookeries), often close to farms or villages.. Mainly resident, but northern populations may move south in the harshest winter conditions.

The carrion crow (Corvus corone)
Crows tend to be more solitary, often found near areas of human activity or habitation. The carrion crow is all black including the bill, legs and feet. The plumage has a green or purple sheen. 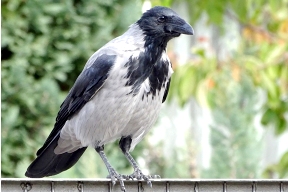 Western jackdaw (Corvus monedula)
A black-plumaged bird with a grey nape and distinctive pale-grey irises. It is the second smallest member of the genus Corvus.
Genetically jackdaws are more different than the rest of the other members of Corvus family. Populations in marginal uplands in Britain show that western jackdaws greatly increased in numbers between the 1970s and 2010 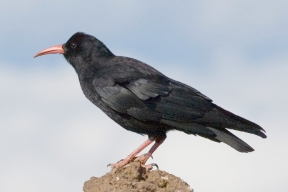 Red-billed chough (Pyrrhocorax pyrrhocorax)
The closest relatives are the typical crows, Corvus, especially the jackdaws in the subgenus Coloeus. A bird with glossy black plumage, a long curved red bill and red legs. P. p. pyrrhocorax, the smallest of the known subspecies, is endemic to the British Isles, where it is restricted to Ireland, the Isle of Man, and the far west of Wales and Scotland, although it recolonised Cornwall in 2001 after an absence of 50 years. In 2013, juveniles were reintroduced onto the north coast of Jersey CI

Eurasian magpie (Pica pica)
With its black-and-white plumage and long tail, there is nothing else quite like the magpie in the UK. When seen close-up its black plumage takes on an altogether more colourful hue with an iridescent sheen to the wing and tail feathers.
The preferred habit is open countryside with scattered trees. Non-breeding birds will gather together in flocks. They sometimes breed at high densities in suburban settings such as parks and gardens. They can also be found close to the centre of cities.
Magpies are normally sedentary and spend winters close to their nesting territories but birds living near the northern limit of their range can move south in harsh weather.

Eurasian jay (Garrulus glandarius)
They are the most colourful British members of the crow family. You can find jay across most of the UK, except northern Scotland. They inhabits mixed woodland, particularly with oaks. It is their habitual acorn hoarding has credited them with being resposible for the rapid northward spread of oaks following the last ice age.