There are 50 species of gulls in the world, in Britain we have six species of commonly occurring breeding gulls.  We also have a small, but growing, breeding population of Mediterranean gulls and a handful of confirmed or suspected breeding attempts from yellow-legged gulls and little gulls. There are also two other species that are winter visitors.
All gulls are however, notoriously difficult to identify. Their plumage changes as they age and there’s a great deal of variation within species. This guide highlights the key features to look for, mostly in adult birds.

Until recently, most gulls were placed in the genus Larus, but this arrangement is now known to be polyphyletic (Grouped together but do not share an immediate common ancestor.), leading to the resurrection of other genera.

Herring gull (Larus argentatus)
Herring gulls are large, noisy birds found throughout the year around our coasts and inland around rubbish tips, fields, large reservoirs and lakes, especially during winter.
Adults have light grey backs, white under parts, and black wing tips with white patches. Their legs are pink, with webbed feet and they have heavy, slightly hooked bills marked with a red spot. Young birds are mottled brown.

Yellow-legged gull (Larus michahellis)
The yellow-legged gull has only recently been recognised as a species in its own right, having previously been considered to be a race of herring gull. Adults have darker grey backs and wings than herring gulls They have more black in the wing tips than herring gulls and smaller white patches. The legs are bright yellow, there is a red ring around the eye and the bill is yellow with a large red spot. Juveniles start to gain a grey ‘saddle’ on their backs quickly as they moult to first winter plumage.
Immature birds gain adult-like characteristics as they mature over the course of five years with the feathers turning dark grey replacing the brown and black immature feathers.
They are now a regular sight in many parts of Southern Britain.

Lesser black-backed gulls (Larus fuscus)
The lesser black-backed gull has a dark grey to black back and wings, yellow bill and yellow legs. Their world population, found entirely in Europe, declined in the 19th century due to persecution. They then increased their range and numbers. Today thre are again serious concern about declines in many parts of its range. The UK is home to 40 per cent of the European population and more than half of these are found at fewer than ten sites.

Great black-backed gulls (Larus marinus)
A very large, thick-set black-backed gull, with a powerful beak. It has a heavy flight and can look quite hunched when perched. It will fight off other gulls and chase them to snatch food.

Common gulls (Larus canus)
The common gull has greenish legs and a yellow bill. Despite its name, it is not at all common in most inland areas, though it can be abundant on the coast and in some eastern counties. They are now seen more often in towns and on housing estates in winter.

Mediterranean gull (Larus melanocephalus)
The Mediterranean gull has an all-black head in the breeding season. Adults have white wing-tips and underwings, and the younger birds have more wing markings. It has a large, slightly drooped beak, bright red when adult.
A very rare UK bird until the 1950s, it is widespread in winter and breeding in ever increasing numbers. It is mainly found along the east and south coasts of England. Most of the breeding population nest within black-headed gull colonies at coastal wetlands. More widespread in winter with some beaches in Norfolk and Kent attracting more than a hundred birds. Also found inland in small numbers wherever black-headed and common gulls gather (especially in roosts on reservoirs).

Black-headed gulls (Chroicocephalus ridibundus)
Gulls are small seabirds, many of which also live inland for at least part of the year;particularly in N England, Scotland and Wales. some are strictly marine. Most are grey, black and white when fully mature, but extensively marked with various shades of brown during from one to four years of immaturity. It is found commonly almost anywhere inland. Black-headed gulls are sociable birds, usually seen in small groups or flocks, often gathering into larger parties where there is plenty of food, or when they are roosting.

Black-legged Kittiwake (Rissa tridactyla)
Kittiwakes are medium-sized gulls with a small yellow bill and a dark eye. They have a grey back with white underneath. Their legs are short and black. In flight the black wing-tips show no white, unlike other gulls. The population is declining in some areas, perhaps due to a shortage of sandeels. After breeding birds move out into the Atlantic where they spend the winter.

Little gull (Hydrocoloeus minutus)
The little gull is a small gull. Adults in summer have black heads, while young birds have a black mark on each wing which forms a ‘W’ pattern. In flight adults show a pale grey upperwing, with no black wingtips, and a very dark grey underwing.
Little gulls can be seen around UK coasts from July to April. In late summer and autumn, birds are largely seen between Tayside and Yorkshire, with smaller numbers further south. In spring, birds can be seen around the Irish Sea with concentrations in places like the Alt estuary. 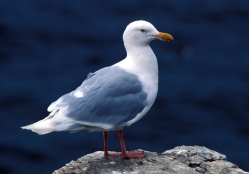 Glaucous gull (Larus hyperboreus)
The glaucous gull is a winter visitor, mostly seen between November and March. It is a large pale gull with white wing tips. Younger birds are creamy white or more biscuit coloured, depending on age. All have pale wingtips. It is bigger than a herring gull and bulkier, with a fiercer expression, larger beak and squarer head than the smaller but virtually identically-plumaged plumaged Iceland gull. 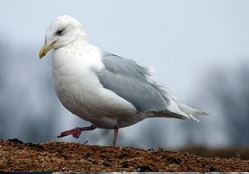 Iceland gull (Larus glaucoides)
The Iceland gull is a medium-size gull. It has a rounded head and smallish beak, giving it a dove-like expression. It has very pale plumage and white wing tips and, like the glaucous gull, it is sometimes referred to as a ‘white-winged’ gull. It is a winter visitor, with small numbers of birds, usually seen alone. It breeds in the Arctic and winters as far south as Britain.

All species of gull are protected under the Wildlife and Countryside Act 1981 and the Wildlife (Northern Ireland) Order 1985.