Some members of the pea family found in Britain
(Fabaceae/Leguminoseae)

Here are just a few examples of wildflowers from the vast range contained in the Pea family, Fabaceae formerly known as Leguminoseae (with approximately 19,000 species worldwide). It includes clovers, medicks and vetches, plus bushes such as gorse and broom; as well as the laburnum.
Sometimes the flowers look as though they only have two petals, but all flowers in the pea family have five petals, and five fused sepals behind them, forming a bi-symmetric flower. The seeds are housed in pods.

In order to aid identification we have divided them up, as follows.

True Clovers (Trifolium species)
Clovers, are common everywhere in Britain. Habitats include old fields, grassy places, and roadsides. Clovers have three leaves opposing each other on one stem. Occasionally four, five or even more leaves can be found but this is rare. The individual leaves are green, generally oval shaped, sometimes with a point at the end and can show variegation. Many clovers have a ‘ball’ of small tubular flowers. The tiny seeds in ‘pea pods’ are found at the base of the flowers.

Medicks and trefoils (Melilotus and Lotus species)
Thirty species of Medicago are recorded in Britain. These include the native spotted medick (M. arabica), black medick (M. lupulina), bur medick (M. minima), toothed medick (M. polymorpha), sand lucerne (M. sativa varia) and sickle medick (M. sativa falcata). They are closely related to the true and sweet clovers. Trefoils are a larval food plant for several butterflies such as the common blue and various moth species They are a valuable nectar source for many other insects, and some also produces highly nutritious pollen.

Vetches and vetchlings (Vicia, Anthyllis and Lathyrus species)
Vetchlings are similar to the true vetches. The key differences are the vetchlings have fewer leaflets – sometimes just one pair and often winged stems. In Lathyrus species the styles are hairy on the upper side only, whereas Vicia has styles hairy all round. Meadow vetchling attracts the wood white butterfly, which lay their eggs on the plant.

Restharrows (Ononis species)
Nine species of restharrow are recorded in Britain. These include the native small restharrow (O. reclinata), common restharrow (O. repens) and spiny restharrow (O. spinosa). The presence or absence of spines is not a diagnostic character for the perennial species. Restharrow is a larval food plant of the common blue butterfly (Polyommatus icarus) and the grey pug moth (Eupithecia subfuscata)

Broom (Cytisus species)
Broom is a non-spiny shrub whose seed pods turn black when they are fully ripe. It is most likely to be confused with gorse, but this has long spines and no leaves. Broom is a common shrub on heathlands, sea-cliffs and wasteland throughout the UK apart from the Outer Hebrides. It prefers sandy, acidic soil and is a good indicator of soil type. All parts of the plant are poisonous to humans.

Gorse or  furze (Ulex species)
Three species of gorse (Ulex europaeus) exist in the UK. A small shrub, it can be seen in all kinds of habitats, from heaths and coastal grasslands to towns and gardens. It generally flowers from January to June, while its close relatives – Western gorse (Ulex gallii) and Dwarf gorse (Ulex minor) – flower from July to November. It provides shelter and food for many insects and birds.

Petty whin or needle furze (Genista anglica)
A small, wiry, native shrub, growing up to 1m tall. The flowers are in short spikes, yellow, up to 1cm with long keel petals. The leaves are pointed ovals.Compared to gorse the flowers are about half the length, but the stiff woody (not green) spines are just as lethal!
Found scattered throughout the country, but is most common in the South and Southwest. It grows on damp heaths and on the drier edges of bogs. In upland areas it grows in damp, unimproved pastures. It is on the decline in England 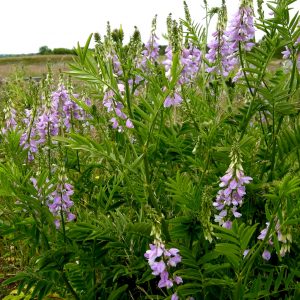 Goat’s-Rue (Galega officinalis)
This European introduction is heavily concentrated around the London area where it is a common roadside plant. It occurs in swathes at the side of motorways leading into London but the distribution drops off as you go north. There is little to be found in Scotland, none in Ireland and only a little in Wales. To date, it has predominantly been an urban plant, but it is now spreading into rural areas. It is a perennial herbaceous plant with a hollow stem and elliptical or lanceolate leaves. The flowers are light blue to violet in color. Many garden forms are hybrids between G. officinalis and G. patula (G. x hartlandii) and it is probable that many records refer to this taxon. Poisonous to many mammals including domestic cattle and sheep. 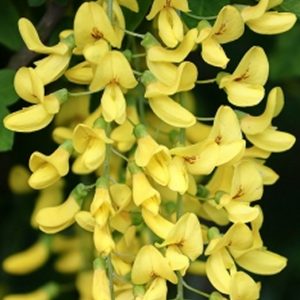 Laburnum tree (Laburnum × watereri)
The laburnum, a deciduous tree introduced to Britain in 1560 and now naturalized in Scotland. It is one of the most commonly planted ornamental trees. The tree you will see most often is a hybrid of the Scots laburnum (Laburnum alpinum) and the Southern European common laburnum (Laburnum anagyroides) called Voss’s laburnum. It has yellow pea-like flowers in spring and pods that bear poisonous seeds in autumn.