A Year of UK Wildlife

Where to See the Best in Britain Each Month

Something that can tend to pass many people by when thinking about travel in the UK, is the huge variety of wildlife that we have, be it in land or along the coastline. Luckily, Premier Inn have enlisted the help of wildlife expert and television presenter Nick Baker to detail just how many amazing animals are beneath our noses right here in the UK.

Nick, who is an Honorary Fellow of BNA, has created a wildlife calendar for the UK, so no matter the month, you’ll have a place to go, and a new animal to see!

Where: In England, within the Peak District or Upper Pennines. In Wales, only in Snowdonia and for Scotland, the ‘white rabbit’ is common throughout most of the highland region of Scotland.
What better way to start the year, than to spot a unique creature surrounded by beautiful scenery? The white mountain hare isn’t another breed that you haven’t heard of, but a Mountain hare in its winter coat. Starting in November and keeping its coat right through to April, January is prime time to head out on a picturesque winter walk. The coat turns white to camouflage the hare in snow, but if the grass is green, you stand a great chance of spotting these cute, snowy white animals.

Where: Shapwick Heath National Nature Reserve, Somerset, Brighton Pier, Sussex and Attenborough Nature Reserve, Nottinghamshire
The cold, wintery months still provide more than enough reason to get outside and experience nature. Its still unknown why these murmurations take place, however they create a truly other-worldly, awe-inspiring sight. Across the country thousands of starlings take part in this dance in the skies, creating ever changing shapes before settling in trees, on buildings or even under piers. Some of the best places to catch a murmuration can be in Somerset, Sussex and Nottinghamshire. Try heading out just before the sun sets for the best views.

Where: Across the United Kingdom
Early on in the year is a great time to see birds, and March signals the start of the migration back into the UK for multiple species. Whether you’re in your back garden or out in the forest for a walk, you’ll notice emerging birdsong from the likes of chiffchaffs, sand martins, wheatears and more. With the warmer weather starting to come through too, March is the perfect time of year for the avid bird watcher.

Where: Your local nature park
Those first warm breaths of Spring bring out the sun-bathing reptiles. This is our most widespread and common reptile, so you can search for it anywhere there is short vegetation at the edges of paths and on walls. They can be tricky to see as they are super-fast when thermally charged, usually all you get is a quick rustle and the glimpse of a tail as they run for cover at our approaching feet. A tip to see them is to freeze when you hear this and simply wait, in most cases the furtive little reptile will re-emerge and resume its original position soaking up the early spring sunshine.

Where: Farne Islands, Northumberland
David Attenborough describes this as his favourite place in the UK, and it isn’t hard to see why. There’s thousands of sea birds here, in addition to a grey seal colony. You’ll need to take a boat out to this group of islands, but in May its well worth the trip, as this when you’ll spot nesting birds, including the instantly recognisable Arctic Tern, with its whitish grey feathers and black ‘cap’ on top of its head.

Where: Northumberland coastline
Many might think that you need to go much further afield to spot whales, however a June trip to the east of England in Northumberland and you could be lucky. You’ll need to take a boat trip out (as with almost any whale watching experience around the world) but then you could be perfectly placed to spot a pod of minke whales in their natural habitat. 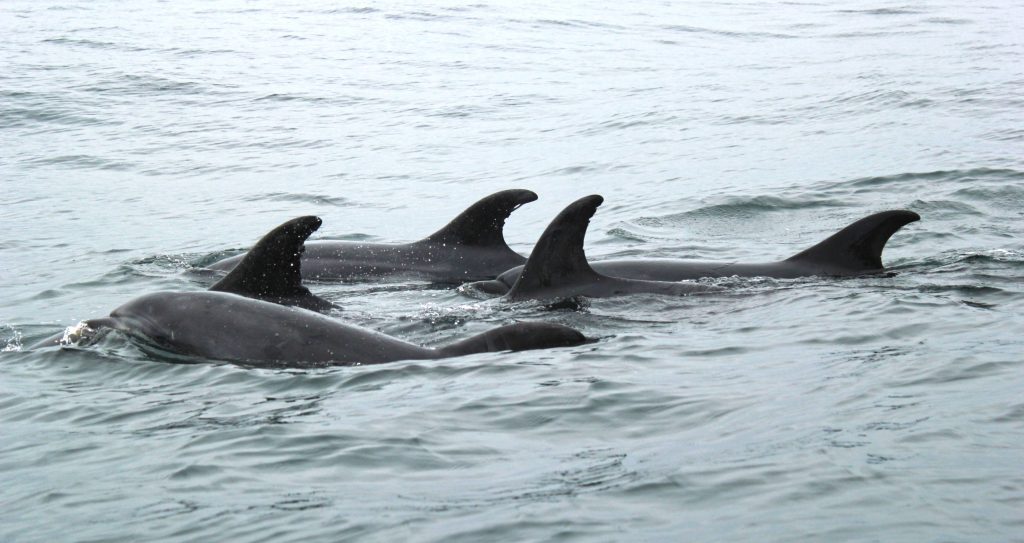 Where: Falmouth, Cornwall
Continuing with our sea theme, we’re leaving the east coast and whales, for the south west and dolphins. Not surprisingly, they’re a major draw for tourists of Cornwall and heading to Falmouth in July should maximise your chances of seeing them. They can be seen throughout the year, however the best times (not just for the weather) are between June and August, so July couldn’t be more perfect for a summer trip to the coast to see these amazing animals during their search for plankton. 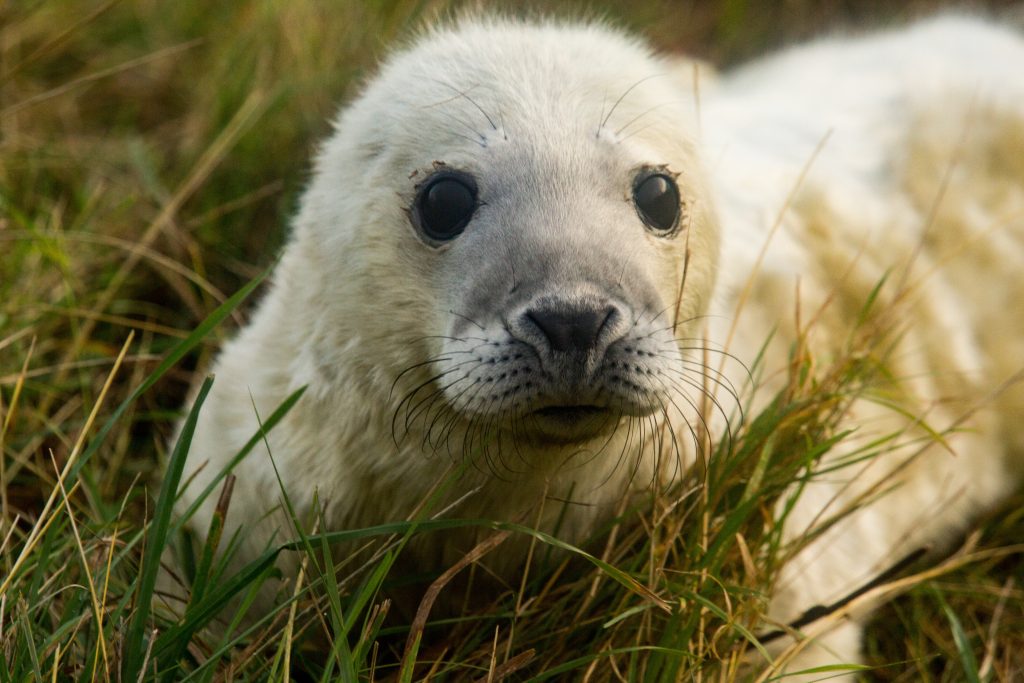 Where: Pembrokeshire Coast, Wales
West Wales plays home to around five thousand Atlantic grey seals, and August in particular, is a great time to spot seal pups resting on the rocks with their parents. Seals are of course protective of their pups, so pup on more secluded beaches at the foot of the cliffs around Moylegrove, St. Davids and Cemeas Head.

Where: Cambridge
As Summer starts to merge into Autumn, there isn’t many better ways to spend a balmy September evening than with a ‘Bat Safari’. Yes, you heard that right, from May until late September, the Cambridgeshire Wildlife Trust runs bat safari punting tours between Cambridge and Granchester Meadows. For approximately 90 minutes, you’ll be gliding along the river as bats swoop around you in the low light. The tour even includes the use of specialist equipment that converts the bat’s sonar signals into audible frequencies. A truly memorable experience. 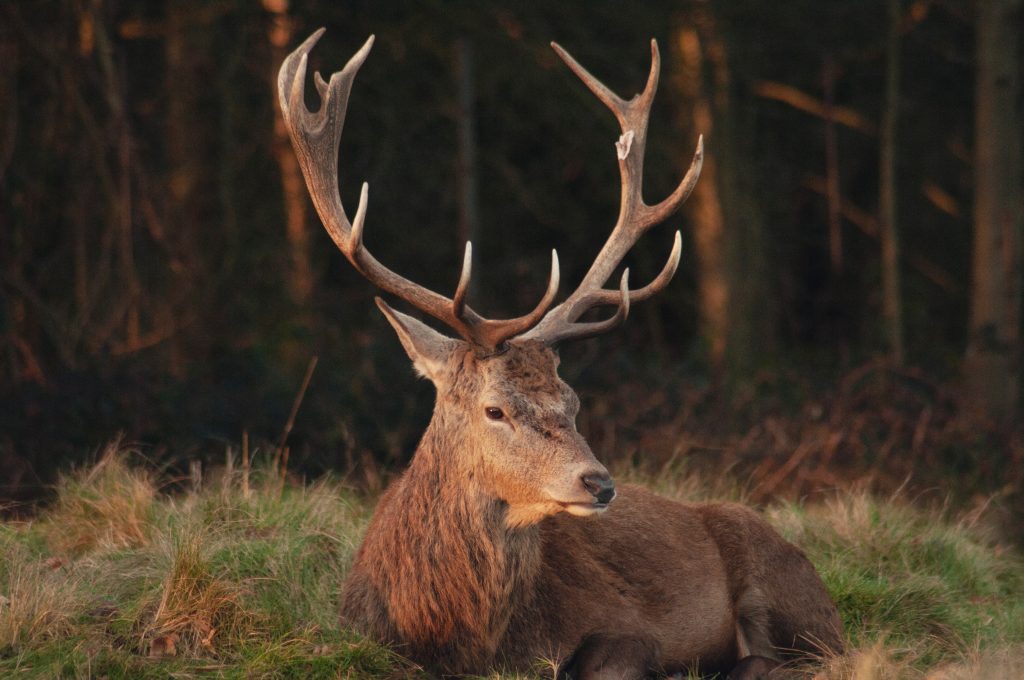 Where: Richmond Park, London
If you want to escape from the hustle and bustle of the big city, there’s not many better place than Richmond Park in London. This huge expanse of land plays home to hundreds of deer and is a must do if you live or are just visiting London. October marks the annual deer rut, so for beautiful scenery mixed with the drama of these rutting deers, be sure to go IN THIS Autumn month. Just make sure to give the deers a wide berth and keep any dogs on their leads.

Where: Dartmoor, Wales and Upland Rivers in Scotland
Head to the highlands where the rivers run fast and furious. Salmon are returning to the gravelly river beds of their youth in order to complete their lifecycle and spawn. Many of them will have travelled thousands of miles since the last time they swam these waters, having spent up to 4 years feeding in the ocean.Now is a good time to catch up with them en route ‘home’. The best places to head to are the weirs and the waterfalls – here you’ll get to see the fish leap spectacularly out of the water as they fight the current and gravity to get to their final destination. This is fish twitching at its best. 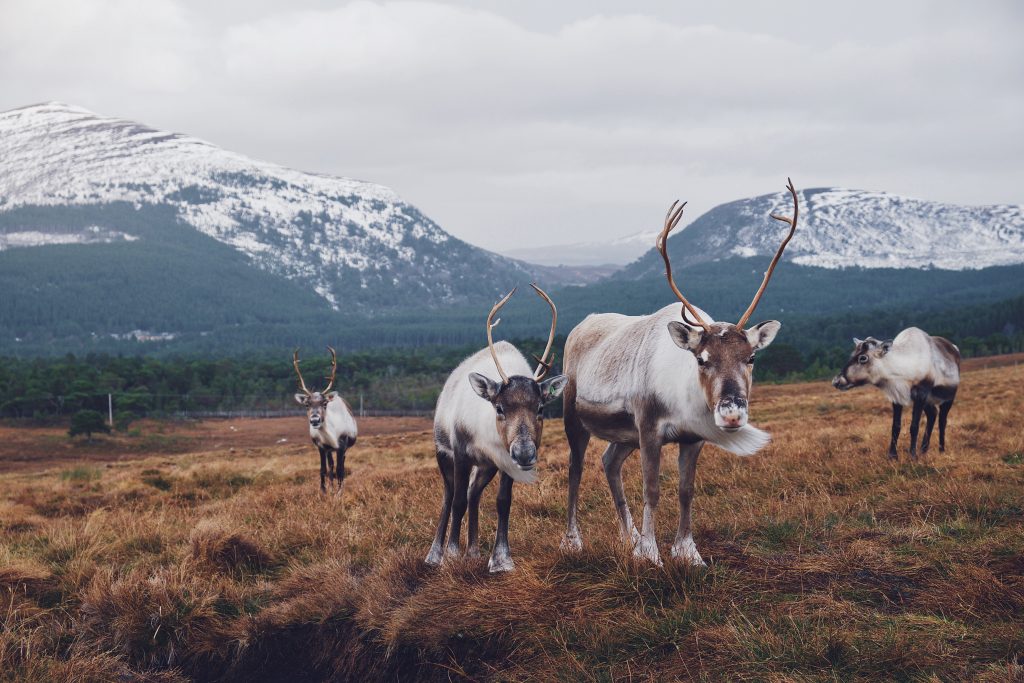 Where: Cairngorms, Scotland
How else could you end a year of wildlife spotting? Truly get in the Christmas cheer in Cairngorms with some reindeer spotting. You can see these majestic animals all year round, but with the chance of a crisp frost or even snow at this time of year, December in the Cairngorms is the recipe for a Christmas to remember. At 150 strong, this is the only free-roaming herd of reindeer in the entirety of the UK.

Additional comment from Nick Baker on wildlife in the UK:
“A testament to just how great UK wildlife is, is how hard it was to choose one animal to see per month. From whales to birdlife, deer, insects and more, Britain is brimming with nature and that’s something we can often forget. It doesn’t take long to get out of the hustle and bustle of a city or town, and once you do, you’re greeted with great scenery and an array of animals to spot.

If amazing wildlife is a must when planning your travels, you really don’t need to go abroad as there is so much here in the UK. The most important thing in 2019 is that we celebrate it, and in turn, protect it.

Our thanks to Premier Inn for providing this feature

There are no upcoming events at this time.